For those playing the underwater version of Friday 3 Questions, here's how to play. Every Friday I ask 3 questions. My answer is in the comments section, where you are welcome to leave you answer to the 3 questions as well. This week's theme is things that are wet:

1.) Who would win in an epic battle for Lord of the Underwater Realm, Namor the Submariner or Aquaman? Why?

2.) What's the most fun you've had in or around a large body of water?

3.) Too name a few: Jaws, The Abyss, The Deep, Dead Calm, Pirates of the Caribbean. What's your favorite movie which features the ocean as a major part of the film? 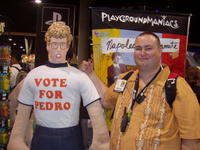